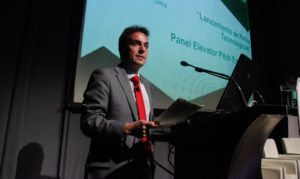 InnovaSpain has interviewed Francisco Velasco,Executive Director of MRI and Director of Strategy of KIM, within the framework of the VI Innovation Meet, held on 29 June at the Casa de América in Madrid. You can read the full interview in the article published on his website. We also reproduce its contents below:

They started organizing the Innovation Meets about three years ago and, in that time, ‘they have become reference events in Europe to address innovation and good practices’. This is what Francisco Velasco believes, executive director of MRI and director of Strategy of KIM, two of the companies that make up the tripartite alliance organizing. The next meeting, which will host the Casa América in Madrid this Thursday, will focus, according to his words on ‘how to expand the horizons of collaboration between Spain and Latin America’.

“We believe that the cultural ties that unite us and the changing environment in which we are going to make it increasingly necessary for us to collaborate in this regard,” Velasco says when referring to relations between Spain and Latam. And it is necessary to join forces to be able to compete. “If we look at patent applications worldwide over the past year, China has been responsible for 38 percent,” he argues.

These “cultural ties” allow for a more “natural” relationship between the two regions. Both have several characteristics in common (“risk aversion, creativity, great relational ability”, etc.) that enable us “in business we can get along“.

In the opinion of the Executive Director of MRI, relationships are currently “at a good time”. Proof of this is that “free trade agreements between the EU and different Latin American countries have been implemented in recent years”. “We cannot forget that the EU is the second trading partner of the region and since 2009 has even doubled trade with Latin America.”

He is convinced that “it is a good time to have more ties with Latin America.” “The global picture is changing a lot with the strength of China and other blocs on intellectual property and technology,” he continues. This cooperation can create a transnational bloc between Spain and Latin America that has more influence on the technological leadership of the world”.

Also noteworthy is the fact that Spain has pushed the entry of Chile into the Eureka Network, an inclusion that will be formalized this Thursday (becoming the first Latin American country to be part of this group). Precisely the opening of the VI Innovation Meet, that same day, will be in charge of the Minister of Economy, Promotion and Tourism of that country, Luis Felipe Céspedes Cifuentes.

After the inauguration, the event will continue throughout the morning with special emphasis on three areas: Public policies on innovation and entrepreneurship between LATAM and Europe; Experiences of business cooperation in Innovation and Entrepreneurship, and Intellectual Property Management, technology transfer and international networks.

MRI and KIM, together with KI, , are part of The Knowledge Agents Alliance (KAA), the group that organizes the meeting. In their day to day, these companies are dedicated to improving the return of the companies in the investments of R&D. They focus on three aspects: the commercialization of technologies that have not been put on the market (there are many patents in the world that are not used), the acquisition of technologies (thereby helping companies innovate) and architecture Innovation (creating an ecosystem that favors these breakthrough practices). The role of Francisco Velasco in his dual role is to mark international business strategies and define business development.

“Spain has a more historic innovative culture that began 20 or 30 years ago and has been greatly enhanced under the protection of the European Union, but countries such as Chile or Colombia, although they have a commitment to innovation more recent, have put great emphasis in having the appropriate reference models”, he says when asked where there is a greater commitment to R&D&I development.

He believes that “reference models” are the key in these cases. “In Spain we have always tended to learn from Germany and France“, for example. And Chile has also had a European model that they can adapt to their own needs, not forgetting the commitment to training. “We have been working in this country for the last six years and we are always admiring the work they are doing”, he adds.

This article was first published in InnovaSpain