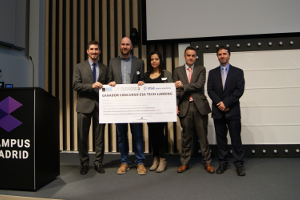 Breogán Pato is a Spanish researcher of the University of Bergen (Norway). His Project, “Preventing head-clogging of ink-jet printers for ceramics (tiles) by the use of an advanced fluid filters” (original name: “Prevención de la obturación de los cabezales de impresoras ink-jet cerámicas mediante el uso de filtros fluídicos avanzados”) won the “ESA Tech Landing 2016” contest. This contest is an initiative of the European Space Agency (ESA) and KIM, ESA’s broker in Spain. The objective was to discover new applications outside the aerospace industry for the technologies developed by the Agency.

“The motives that led me into participating to this contest are multiple”, says Breogán Pato. “On the one hand, the possibility of applying space technology to everyday life appeared to me as a very attractive challenge. And I liked the idea of getting in touch with ESA and the Spanish aerospace industry. Furthermore, as a researcher, I was very interested in receiving the training in technology transfer that KIM offered to the winner of the contest. Being capable of transferring the results of research to the industry is a skill that is every day more demanded by universities”.

The industries that use printers in their production are increasing daily. This process is known as “additive manufacturing”. One of these industries is precisely ceramics.

The solution devised by Breogán Pato is based on the use of an advanced fluidic filter (pat 642) developed by ESA to prevent head-clogging of ink-jet printers for ceramics.

“I am a researcher in new materials. In 2013, while I was working in the Institute of Ceramic Technology in Castellón (Spain), I noticed that ink-jet printers for ceramics recurrently had problems with the obstruction of printing heads due to the presence of agglomerates in the ink. In order to solve this problem, filters suited to the design of the ceramic printers had been added. However, these filters also emerged to show persistent obstruction problems,” explains Breogán Pato. 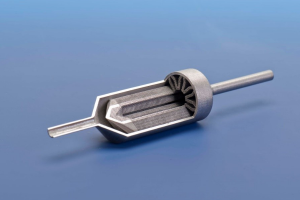 “The advanced fluidic filter developed by ESA consists of a new structure that maximizes the filtering surface and prevents obstruction and accumulation of particles”, indicates Breogán Pato. “The design of the filter is conceived with a high filtering surface, which significantly improves the pressure fall and makes the filter less prone to getting obstructed. Furthermore, its structure shows several alternative passages for the fluid, thus guaranteeing a constant flow of liquid in the filter and impeding the accumulation of particles. Because of this, I believe that this filter could solve the issue of head-clogging that often emerges in ceramic printers.”

Beyond its use in the ceramic industry, Breogán Pato foresees that the solution that he has designed could be successfully applied in sectors that use metallic nanoparticles for the printing of its products. This is the case for the new generation of screens with the “quantum dot display” technology or for radio-frequency identifiers (RFID), which are both widely used by several industries to avoid thefts and to improve the identification and localization of products, animals, etc.

Being the winner of the “ESA Tech Landing 2016” contest, this researcher has the opportunity to present his project at the selection process that takes place to enter one of the ESA Business Incubation Centres, the network of incubators of the European Space Agency.

In the near future, Breogán Pato would like to take advantage of this opportunity to explore the commercial possibilities of the solution that he has devised.